Earnings Modest for Most Design Firms

While a handful of interior designers are attracting lucrative projects and media attention, most design firms are just getting by.  Of the designers who responded to our 2014-15 Interior Design Fee and Salary Survey, nearly half said they expected their firm’s total gross sales for 2014 would be $100,000 or less. More than two-thirds (69%) reported having an average total dollar sale per project of $25,000 or less.

Across all respondents, estimated total annual firm revenues for 2014 broke down as follows:

Many of these designers are sole practitioners or small firm owners employing only part-time help.  More than one fourth (28%) work alone, without other design team members, and one third (34%) use no outsourced services as well. In addition, however, many of these same designers say they do little or no marketing and invest little or no time or money in professional development activities.  As previously reported, a fair number are working long hours but bill only a fraction of those hours. Many factors affect how well a firm performs in a given year.  Nonetheless, taken together, this is a formula for poor prospects.

2016 project backlogs are much higher going into the New Year. That’s a great sign that better results are ahead. 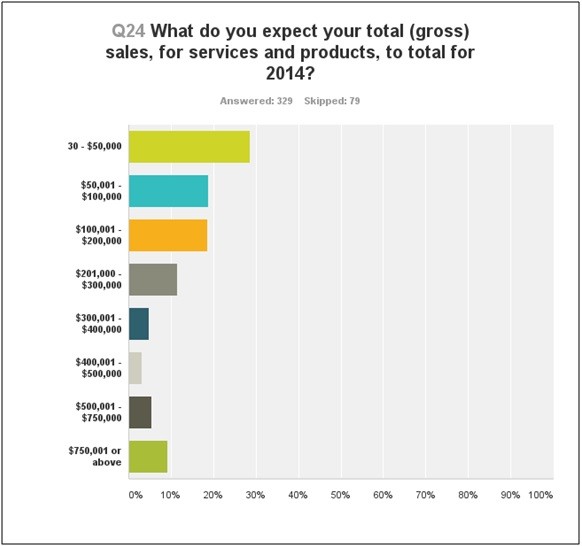 Gail, with her team at Gail Doby Coaching and Consulting, has helped more than 10,000 designers in 76 countries. Many of them have achieved amazing results... doubling, tripling (and more) their revenue and profit... with clarity and confidence. Gail and her team build one-of-a-kind experiences, walking beside Interior Designers to help them create and implement their plans.